Home » What Are Teleoperated Robots? A Research-based Study

What Are Teleoperated Robots? A Research-based Study

In recent times, smart machines have become an integral part of human life. Robots are one such type of smart machine that is now used to execute different types of work. Lately, these robots have transformed into Teleoperated Robots.

You can consider the teleoperated variants to be a gift of technological advancement. You can easily use these robots for executing different kinds of work. Here, you can learn some outstanding facts about teleoperating robots. Moreover, you can go through its examples and know in which spheres they are mostly used. 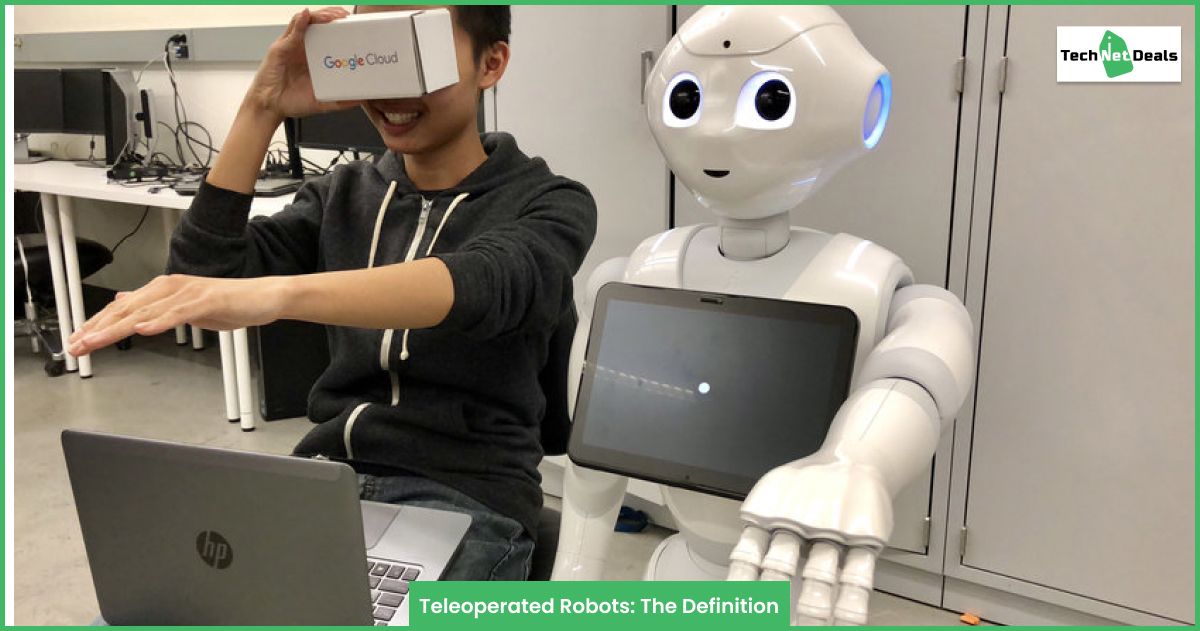 In simple words, teleoperated robots are remote control robots. In such a system, an operator operates the robot from a remote location. So, the work efficiency of the robot depends on the knowledge and skills of the operator.

The teleoperated robots help in teleoperations. It means remotely working on a business process. In 2020 when the global lockdown took place due to the Covid-19 pandemic, remote operations dramatically increased.

Nowadays, remote operation is a normal thing that anyone affords for their business. Making a remote control robot is an easy task today. Moreover, giving an interface to it is also easy. Even a basic computer setup can become the control pad of a teleoperated robot.

On the other hand, teleoperated robots can become one of the smart machines of the future as it gives way to Augmented Reality (AR). The operator would only need a transducer to track the activities of a robot.

So, as you now know the definition and working procedure of the teleoperated robots, it is time now to go through its examples.

You may like to read: What Is Robotics? A Brief Explanation In 2022 – TND 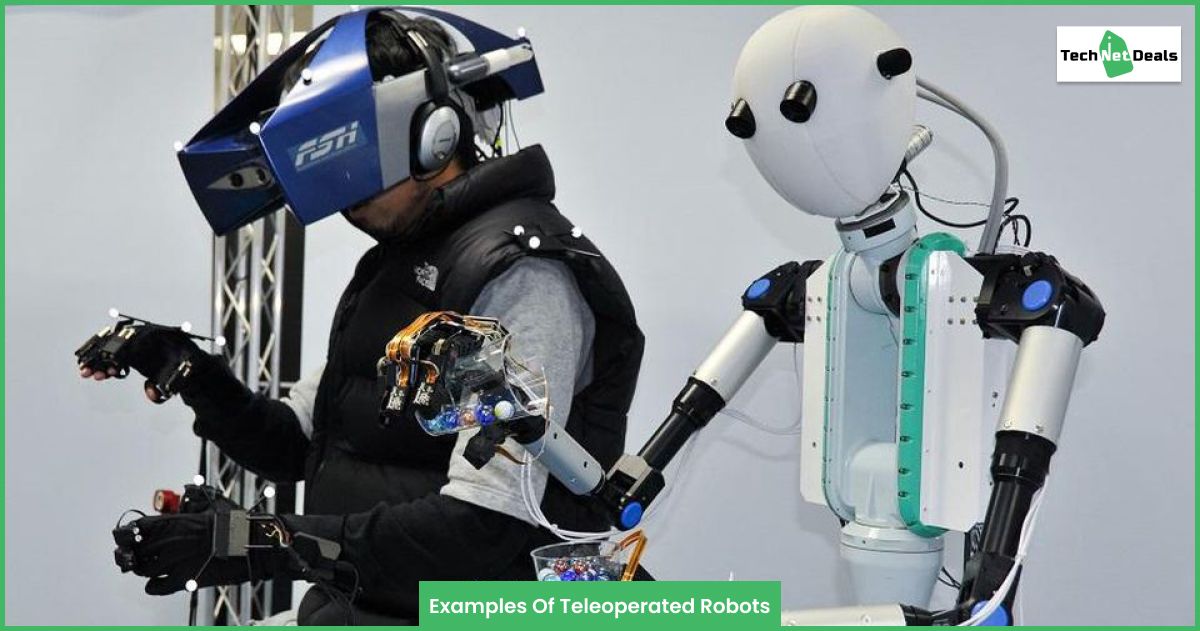 There are a few examples of teleoperated robots that you need to know about. All these robots are designed in such a way that they cope with their environment. The details are given below:

Read more: What Are Pre-programmed Robots? A Research-Based Study 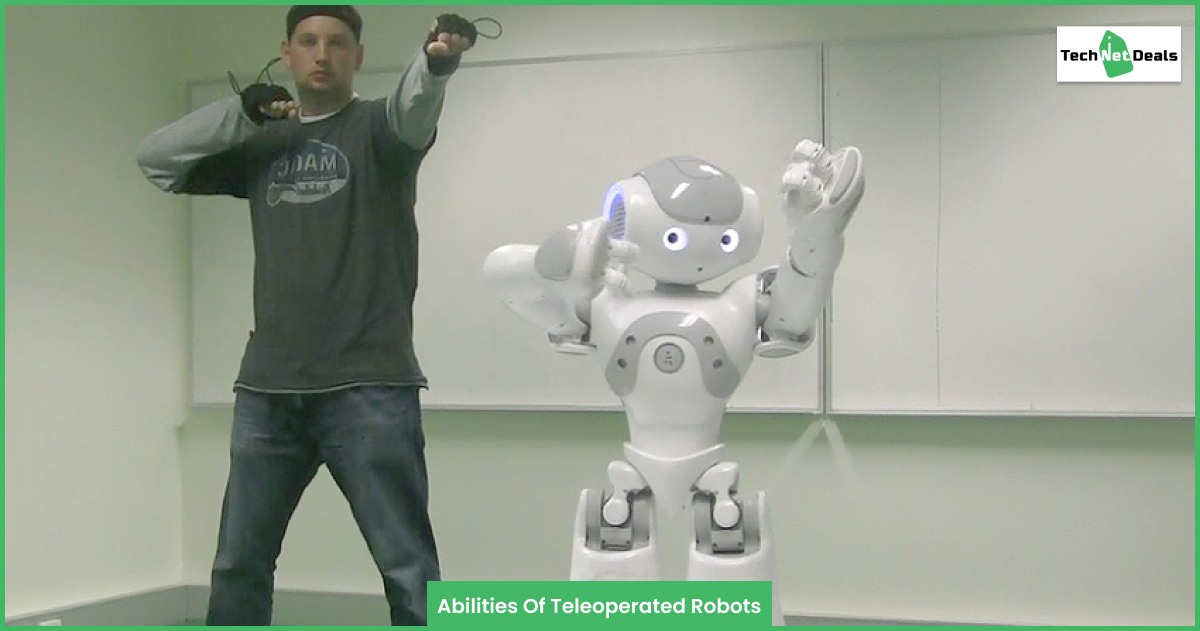 Now, as you know the teleoperated robots examples, you should also know their abilities. Where the engineers design each robot for different purposes, these are some general abilities all machines should have.

All teleoperated robots should be able to work in complex environments. Often, these structures might be physics constrained.

All teleoperated robots should have the proper ability to deal with distorted sensor data. This can make their work easier. You can limit your action as an operator by limiting the action of the robots with the help of programming.

3. A Teleoperated Robot Should Work According To A Physical Model

4. The Ability To Move Within A System

It is vital for a robot to move within a system. So, all scientists should make it in a flexible manner. Nowadays, most AI-powered robots can make their own decisions and work accordingly. In this case, the operators are not technically robot scientists but programmers.

5. Use The Virtual Sensors Tactically

The ability list of teleoperated robots would not be complete without its compatibility with virtual sensors. This is, again, an element that makes the robots flexible. You can expect this type of robot to boost up production at any time.

1. What Is A Teleoperated Robot?

Any robot that is operated by an operator with the help of remote control is called a teleoperated robot. These are quite trendy nowadays.

2. What Are Examples Of Teleoperated Robots?

Examples of teleoperated robots are commercial robots and manipulator systems.

3. What Is An Augmenting Robot?

Augmenting robots are used to enhance the capabilities of a person. Often it is attached to a business person.

4. Who Made The First Teleoperated Robot?

At present, you can consider most teleoperated robots working in all the spheres given in this article. However, these robots are highly expensive, and you cannot invest in them until you have many profits.

Moreover, you might have to invest in the manufacturing aspect of teleoperated robots. The best you can do is look for such an organization if you can afford it. The teleoperated robots can be the future, and you can consider taking their help for sustaining in the market. However, you should keep in mind that investing in human power is also a must. So, it is vital that you make a proper balance between both while you set up the plan.

Mashum Mollah is a passionate blogger. He loves to share his thoughts, ideas, and experiences with the world through blogging. Mashum Mollah is associated with TechNetDeals & TechTrendsPro.

What Are Autonomous Robots? A Research Based Study

What Are Artificial Intelligence Stocks And How To Buy It?